Can we save ourselves? 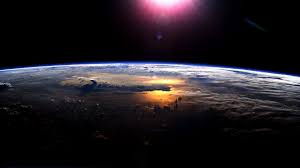 Here in Washington, the past few days have been rough for bleeding hearts like me. I don’t want to blog (much) about the current political environment, so I’ve found something more uplifting to write about.

In preparation for a move later this year, I’ve been sorting through my voluminous collection of space-related reports, and I’ve come across a report on a 1990 Eisenhower Centennial Space Roundtable held in D.C. My friend Theresa Foley, then a journalist, served as moderator (she was the only non-white-male speaker on the agenda).

I’ve enjoyed re-reading the keynote address at this event, given by Rev. Theodore Hesburgh (b. 1917-d. 2015), a Catholic priest and then president emeritus of the University of Notre Dame, so I thought I’d write a few words (mostly his) about it.

Hesburgh was “a powerful moral voice in national affairs,” according to the New York Times. He served on 16 presidential commissions in Democratic and Republican administrations. President Eisenhower appointed him to the National Science Board in 1954. I recall that Father Hesburgh had a lively interest in the space program. For a time he was a member of The Planetary Society’s Advisory Council.

In his 1990 address, Hesburgh said that when President Eisenhower asked him to join the National Science Board, he told the President that he must have mixed him up with someone else. Eisenhower told him, “No, I want to have a philosophical and theological point of view represented on the…Board.” (This is, by the way, what NASA’s astrobiology program is attempting to provide to the community of scientists whose work it funds and to the broader audience that is interested in the work – see my blog post of last June on the subject.) With the beginning of the so-called Space Age in the 1950s, Hesburgh said, he became a “space buff.”

Observing that the 20th century accomplishments of the U.S. and Soviet space programs “were in large measure spurred on by the military challenges and national pride born of the Cold War,” he asserted that “the most difficult political and philosophical question facing us [in 1990] is this: absent the Cold War and the overhanging threat of mutually assured destruction, will the potential benefits to humankind everywhere continue to drive space exploration…?”

“I take as our most compelling symbol” pictures of Earth taken from space, he said. What do these images “say to us?” First, they show no differences or divisions among nations or people. “Is not this vision laden with other philosophical and theological implications: that, like Planet Earth, humankind is one and potentially more beautiful than our past history has indicated; that we survive together or we perish together in this unitary habitat, sharing the same hospitable climate, the air, the water, the land, and, more significantly, those spiritual yearnings for knowledge, freedom, peace, development, a civilization marked by justice, not the wars that injustice spawns?”

“The challenge here,” he said, “is to create a human spiritual unity of understanding and a justice that matches the physical beauty of this planet that is a pure gift to us, and to use it together and not to abuse it separately.”

“Space exploration arrived in time to underline for all Earth’s inhabitants in stark detail what we are now doing, largely due to our profligate use of…hydrocarbon fuels, to destroy, possibly irreversibly, most of these unearned blessings unique to our Planet Earth.”

Seeing a beautiful Earth from space “invites us to dream about ways that we inhabitants of this habitat…might truly become united in human development. To use a space metaphor, reduce the five billion plus people on Earth…to five persons, astronauts traveling in a spaceship. Imagine that one of them, representing us in the developing world (here, Europe, Japan) had possession of 80% of the life resources aboard the spacecraft, and that the other four astronauts had to share the 20% of the resources left…. It’s difficult to conceive of this as a situation promoting peace and justice, but this is precisely the situation in our world today.”

It’s a powerful picture that Hesburgh painted. While the boundaries of the “developed” world may have changed since 1990, it is still the case that a few wealthy nations consume a significant majority of global resources. Even in this great nation, the U.S. of A., the rich continue to get richer while the poor get poorer, a trend that I expect could get worse in the near future.

I share Hesburgh’s view of the potential for humankind to live in peace – whether a sufficient number of leaders in government and industry worldwide do, or will, embrace this view remains to be seen. So far, I’ve heard a lot more talk (for instance, at this year’s World Economic Forum) and seen not enough action. I myself will continue to agitate for action.

« National strategy for asteroid impact preparedness
Space tourism: still a romp for the self-indulgent »
%d bloggers like this: