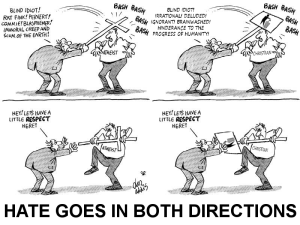 (Comfort happens to be the 2015-16 Blumberg Chair in Astrobiology at the Kluge Center of the Library of Congress. My work is funded in part by NASA’s astrobiology program.)

I haven’t read Brief Candle – so how I can I say the review is brilliant? I say this because Comfort offers a cogent critique of Dawkins’s abrasive rhetorical style and “fiercely reductionist, materialistic world view.” I’ve read a lot of Dawkins’s short works, and his book The Selfish Gene is sitting on my book shelf. I have to confess that I chose not to finish that book and am not inclined to read his others because his way of thinking and writing (Comfort calls his prose style “swaggering”) turns me off. It’s exclusionary and judgmental.

Think about the so-called Brights movement that Dawkins and other vocal atheists signed up to – a great example of how to offend scads of people in a few easy steps. Dawkins wrote in 2003 that the Bright movement “is intended to come to the aid of another beleaguered community in the US: those who, in the most religiose country in the Western world, have no religion, who are variously labeled atheists, agnostics, freethinkers, philosophical naturalists, secularists, or humanists.”

Here are comments on Dawkins’s new book from Publishers Weekly:

“Dawkins tells a good tale as he expounds upon the value in broadly promoting science literacy. In his last full chapter, which takes up a full third of the book, he revisits the scientific ideas for which he is best known in professional, if not popular, circles. Not surprisingly, Dawkins lives up to his reputation as one who attacks his opponents mercilessly, whether the attacks are warranted or not. He once again targets the Templeton Foundation, with its mission to reconcile science and religion….”

And from Kirkus Reviews:

“The Selfish Gene and his spirited defense of atheism, The God Delusion (2006), are his most controversial works, and many readers will welcome his belated attempts [in his new book] to heed criticisms of his unnecessarily abrasive style when debating religious opponents.”

Here’s what Comfort has to say about Dawkins and his latest book.

“Dawkins’s greatest gift has been as a lyricist. With terms such as selfish genes, memes and the extended phenotype, he has provided much of the vocabulary of modern evolutionary biology. He has published a sackful of books laying out the evidence for evolution, against design in nature, and for natural selection as the only mechanism of adaptive evolution. A skilled and popular lecturer, he also discovered a taste for the camera, hosting numerous television documentaries.”

However, over the past 10 years or so, Comfort observes, Dawkins has evolved “from popularizer into evangelist. His 2006 book The God Delusion (Bantam) was an ecclesiophobic diatribe, published around the same time as…similar books by Daniel Dennett and Sam Harris. The gospels of…Daniel, Sam and Richard form the scripture of the ‘new atheism’, a fundamentalist sect that has mounted a scientistic crusade against all religion…. For a time, Dawkins was a rebellious scientific rock star. Now, his critique of religion seems cranky….”

In a blog post titled, “A snarky review of Dawkins’s new autobiography,” Jerry A. Coyne writes, “To be fair, the review is a mixed one, with Comfort lauding Dawkins’s past books popularizing evolution, and praising Dawkins’s “lyrical” and “sparkling” prose. But he simply can’t help himself when it comes to the atheism bit.”

Coyne, a professor of biology at the University of Chicago, appears to be a member of Dawkins’s atheist-scientist camp. Coyne is the author of Faith vs. Fact: Why Science and Religion Are Incompatible (2015). On Coyne’s web site, Dawkins and fellow atheists Sam Harris and Steven Pinker offer praises for Faith vs. Fact. Dawkins: “it’s hard to see how any reasonable person can resist the conclusions of his superbly argued book.” Harris: “Coyne has written a wonderful primer on what it means to think scientifically, showing that the honest doubts of science are better — and more noble — than the false certainties of religion.” Pinker: “some propositions are flat wrong. In this timely and important book, Jerry Coyne expertly exposes the incoherence of the increasingly popular belief that you can have it both ways: that God (or something God-ish, God-like, or God-oid) sort-of exists; that miracles kind-of happen; and that the truthiness of dogma is somewhat-a-little-bit-more-or-less-who’s-to-say-it-isn’t like the truths of science and reason.”

Pinker, and fellow atheists and media talking-heads Lawrence Krauss and Michael Shermer have written promotional blurbs for Dawkins’s new book. Pinker: “Readers…are in for many treats: lively prose from one of our greatest living writers; stimulating ideas on the nature of life and the human condition; and the opportunity to eavesdrop on the workings of an extraordinary mind, intellectually fierce yet personally generous.” Shermer: “may do more to elevate atheism to a legitimate position than any that came before.”

You have to hand it to the likes of Dawkins, Pinker, and Harris: they’re almost as good at promoting their brand –now known as “the new atheism”– as NASA is at promoting its brand. And the media keep eating it up – both brands.

Speaking of which, is anybody paying attention to NASA’s massive publicity campaign for the Hollywood movie “The Martian”? For starters, check out these videos and this Web page. NASA brought “The Martian” star Matt Damon to JPL recently to talk about the movie. NASA’s staging a screening of the movie at Johnson Space Center. NASA officials traveled to the Toronto Film Festival last week to talk up the movie. Tune in to NASA TV tomorrow, September 17, at 2 pm ET for more about “The Martian,” live from NASA headquarters.

One Response to “A Richard Dawkins slap-down”