Very interesting: a map of small asteroid impacts with the atmosphere

Small near-Earth asteroids, around a meter in size, hit our atmosphere and disintegrate around every other week. We now know this because “U.S. sensors” can, and do, detect and measure the energy released by these detonations. As this NASA Web story reports, an unidentified source (you figure it out…) has given the agency 20 years worth of data collected by (ahem) “U.S. government sensors” on “bolide impact events.” These data will be (but aren’t quite yet) available to the scientific community for research. What’s a bolide, and what are bolide impact events? See this NASA Web page for information. Also see this story by Leonard David about the “fireball” site, which he said went up March 1, 2013. Back to the “newly released data.” These twenty years worth of observations show that small asteroid impacts with Earth’s atmosphere are “frequent and random.” A map of these small impact events shows the frequency of, and energy released by, impacts detected from 1994 through 2013. “Over this 20-year interval,” NASA says, “U.S. Government assets recorded at least 556 bolide events of various energies.” The sizes of the dots are indicative of the amount of “optical radiated energy” released, measured in billions of Joules (GJ).   Orange dots represent daytime events, and blue dots represent nighttime events. As NASA notes, the largest asteroid impact with the atmosphere during this 20-year interval was the so-called Chelyabinsk event, in which a 20-meter object exploded over Russia on February 15, 2013, releasing the energy equivalent of 440,000 – 500,000 tons of TNT. This is a really interesting story, in my biased opinion (I work as a consultant to NASA’s Near Earth Object (NEO) Observations Program). The map is a particularly striking visual depiction of what’s going on over our heads all the time – largely though not completely without consequences, as the blast wave generated by the Chelyabinsk event shattered glass and damaged buildings over a wide area. The map shows that because these impacts are randomly distributed, about three quarters of them occur over oceans and about half occur during daylight hours. I’d guess that many of these events had few to zero “naked eye” human observers. As NASA’s story notes, “Meteor Crater near Winslow, Arizona, is evidence of the impact with Earth’s surface of a 50-meter asteroid about 50,000 years ago.” I visited Meteor Crater in 2013 – quite impressive (see below). 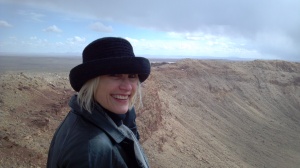 I’ll be interested to see what other insights NEO scientists may glean from this rich database. Thanks to “unidentified source” for repurposing these data.

A sighting during a Leonid meteor shower. Credit: http://www.sciencebuzz.org

A meteor disintegrating in the atmosphere over Texas this past Saturday generated national media coverage and prompted calls to NASA. See CNN’s Nov. 9 report for a quick version of this “fireball” story.

So what is a fireball, anyway? It’s a meteor disintegrating in the atmosphere and making a very visible show of it. The Jet Propulsion Laboratory’s Near Earth Object Program Office offers information on fireballs, also known as bolides. The NEO Program Office also explains the difference between asteroids, meteors, meteoroids, meteors, and meteorites:

“In space, a large rocky body in orbit about the Sun is referred to as an asteroid or minor planet whereas much smaller particles in orbit about the Sun are referred to as meteoroids. Once a meteoroid enters the Earth’s atmosphere and vaporizes, it becomes a meteor (i.e., shooting star). If a small asteroid or large meteoroid survives its fiery passage through the Earth’s atmosphere and lands upon the Earth’s surface, it is then called a meteorite. Cometary debris is the source of most small meteoroid particles. Many comets generate meteoroid streams when their icy cometary nuclei pass near the Sun and release the dust particles that were once embedded in the cometary ices. These meteoroid particles then follow in the wake of the parent comet. Collisions between asteroids in space create smaller asteroidal fragments and these fragments are the sources of most meteorites that have struck the Earth’s surface.”

It seems that people are seeing meteors and fireballs all the time these days….

My explanation for this development is that 1) since the Chelyabinsk event of February 2013 – the spectacular disintegration of a small asteroid in the atmosphere – people are more aware of the phenomena, and 2) due to the ubiquity of smartphones and other handheld imaging and communication devices – not to mention dashcams, which yielded an impressive real-time record of the Chelyabinsk event – information about events such as fireball sightings spreads around the globe in near-real time.

So, back to this weekend’s “fireball” event – who you gonna call when you see something you think is a fireball? NASA seems a logical choice, and, indeed, Bill Cooke, head of NASA’s Meteoroid Environment Office, took media calls about the Texas fireball and actually had some data on the event. However, the Meteoroid Environment Office is “responsible for meteoroid environments pertaining to spacecraft engineering and operations,” not – as far as I can tell – explicitly for monitoring fireball sightings 24/7. The objective of this particular NASA office “is to understand the flux and the associated risk of meteoroids impacting spacecraft traveling in and beyond Earth’s orbit.”

Then there’s NASA’s Near Earth Object Observations Program and its program office at JPL (see above). The NEOO program is tasked with finding, tracking, and characterizing NEOs. Again, as far as I can tell, this program is not explicitly tasked with monitoring fireball events 24/7.

Outside NASA, the American Meteor Society, founded in 1911, is a pro-am astronomy group whose members “observe, monitor, collect data on, study, and report on meteors, meteor showers, fireballs, and related meteoric phenomena.” If you want to see where fireballs have been sighted lately, see this group’s website, which offers lots of other information as well.

(Clearly the Internet and social media have dramatically improved professional and amateur astronomers’ ability to share information on these phenomena. Thank you, Mr. President, for taking a step today toward preserving “net neutrality.”)

You can also check out the International Meteor Organization (IMO), “founded in 1988…in response to an ever growing need for international cooperation of meteor amateur work. The IMO has a “fireball” page as well.

If you see what you think is a fireball, you can report it to the AMS or the IMO. See their websites.

Here’s a final thought for the day. I’ve theorized that more people are seeing meteors and fireballs because they are more knowledgeable about the phenomena than they were just a few years ago and because they have the means to record them. It also seems that news-media reports of UFO sightings are mighty scarce these days. Yes, MUFON lives on, and UFOlogy gets plenty of play on infotainment TV channels such as the Discovery Channel, the Learning Channel, the Science Channel (all owned by the multibillion-dollar media mega-corporation Discovery Communications), the History Channel, and Sy Fy. But the mainstream news media don’t seem to be reporting on UFO sightings these days. Could there be a correlation between a better understanding of natural phenomena and fewer claims of alien spaceship visits to Earth? 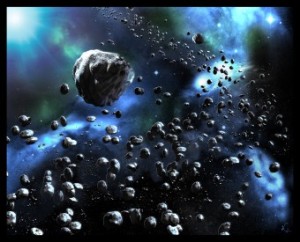 In a previous post, I reported on the establishment of an International Asteroid Warning Network and the first meeting of IAWN’s steering committee in Boston this past January.

At that meeting, the steering committee decided to hold a workshop on communication issues. That workshop took place in September in Broomfield, Colorado, and a report on the workshop is now available.

As part of my consulting work with NASA’s Near Earth Object Observations Program (NASA is a member of IAWN), I was tasked with organizing this workshop. The Secure World Foundation hosted the workshop, and SWF project manager Laura Delgado Lopez worked with me as my co-organizer, co-facilitator, and report co-author (many thanks, Laura!).

Here are a few of the findings and recommendations that came out of the workshop:

The IAWN Steering Committee will be meeting in Tucson, Arizona, next week, and members will be briefed on the workshop proceedings there. The steering committee has not accepted, endorsed, or approved any of these findings and recommendations as yet.

I’ve posted the report on this site (see left menu). We made it short on purpose, so people would read it. Please do!